If you are a serious, or even casual, collector of Penguin books, or if you are just interested in their story, then some of these books may be of interest to you. This is my set of books about Penguin books. Here is the list, roughly in order of publication.

This little book was published by Penguin as Q21, part of its miscellaneous list. It describes the beginnings and initial successes and expansion of Penguin Books from 1935 until 1956, its first 21 years. 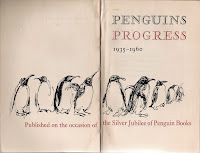 This Penguin Progress was issued to mark the first 25 years of the life of Penguin Books.

This book marks and describes the first 50 years of the story of Penguin books.It carries the Penguin story from the earliest beginnings by the three Lane Brothers, through the floatation of the company in the 1960s and the subsequent more turbulent and corporate years of the 1970s and 1980s.

Penguin Books had been available in Australia almost from the beginning of Penguin in 1935. For much of that time, a local publisher, Lothian Books was used to distribute and then during the war years, print and publish Penguins in Australia.
In 1946, Bill Maynard and his wife were sent out from London to start up a proper Penguin Books Australia operation. A little later, Richard Lane, who had spent several years as a youth in Australia, and who had an Australian wife, also came out to Australia where he helped to extend the role of Penguin Australia. This book describes the foundation and expansion of Penguin Australia through its first fifty years.
The author was a well known Australian historian and writer. 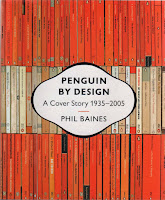 This little book is very useful as it is a complete list, by series, of all of the books published by Penguin from 1935 to 1960.

This book, presented anonymously, but with a preface by the then editor of Puffin Books, Kaye Webb, lists with a short description the current list of Puffin Story books, available in Australia in 1962.


A Checklist of the Puffin Picture Books   (Penguin Collectors Society, 2010) This book is a selection of extracts of correspondence held in the Penguin Books archive at Bristol University. Each of the major members of the editorial staff in the Allen Lane era at Penguin is given a section and the extracts have been well chosen by Steve Hare to illustrate the editorial staff's expertise, idiosyncrasies and contribution to the growth and reputation of Penguin.
The Penguin Collectors Society announced the sudden and unexpected death of Steve Hare on Tuesday 10 March 2015. Steve was an officer of the Society for 22 years and his contribution both to the work of the Society and to the wider world of Penguin matters generally has been incalculable.

Penguin and the Lane Brothers by Stuart Kells (Black Ink 2015)

This book explores the lives of the three Lane brothers, with a special focus on Richard Lane, helped by access to his papers granted by his daughter to the author. The book explores the early life of the brothers, the hard years spent as a farm labourer by Richard Lane in his youth, and tries to dispel some of the myths created by and around Allan Lane, as the sole genius behind Penguin Books. Richard Lane's contribution is perhaps recognised here for the first time. 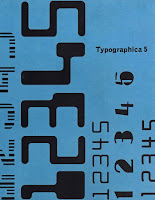 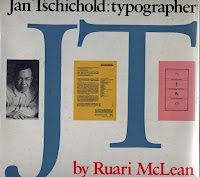 Two Titans: Mardersteig and Tschichold by Hans Schmoller (The Typophiles 1990) 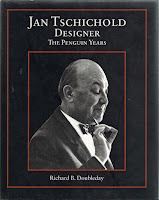 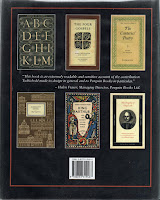