Northanger Abbey and Persuasion were both published posthumously in four volumes in December 1817, following the death of Jane Austen in July 1817. Whereas Persuasion was the last manuscript that Jane Austen completed before she died, Northanger Abbey was a result of her reworking of an earlier manuscript called initially Susan and then Catherine.

The copyright of Susan was sold to a bookseller and publisher, Crosby, in 1803 for £10.  Susan was never published, and the family eventually repurchased the copyright from Crosby in 1816, after the successful publication of Sense and Sensibility, Pride and Prejudice, Mansfield Park and Emma, for the same sum of £10. Crosby was unaware of the identity of the author!

The story was revised and renamed Catherine by the author, as a successful novel called Susan had recently been published. The title Northanger Abbey is thought to have been chosen by Jane Austen’s brother Henry after the author’s death.

Northanger Abbey is a wonderful satire of Gothic novels, which allows Austen to poke gentle fun at the genre, through the words, thoughts and actions of the naïve heroine, Catherine Morland. Although Pride and Prejudice and Emma are generally the most popular of the novels of Jane Austen, Northanger Abbey is my favourite because of all the discussion of literature, especially Gothic fiction, that it contains.

The second edition, published by Bentley in 1833 is the first illustrated edition, first single volume edition and the first English edition to acknowledge Jane Austen as the author on the title page. There was a gap of 15 years between the publication of the first edition in 1817 and the second edition. Northanger Abbey has not been out of print since.

My copy is on display in the Dark Imaginings exhibition. The original publisher's binding and the frontispiece are shown below. The frontispiece shows Henry Tilney finding Catherine Morland, as she is snooping around Northanger Abbey, looking for evidence of a ghastly, imagined, (Gothic) fate for Henry's mother. 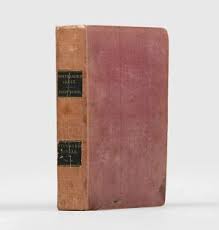 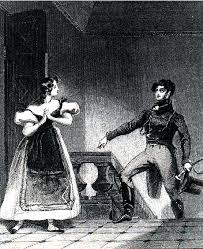