Although we know this book as The Hunchback of Notre Dame, it was first published in France as Notre Dame de Paris in 1831. The more familiar version of the title was coined by the translator, Frederic Shoberl, who provided the text for the first English edition of 1833.

In conceiving the novel, Victor Hugo was mainly concerned with the conservation of important Gothic architecture in France, using the example of the cathedral of Notre Dame de Paris, which was in a rather poor state of repair by 1830. However, the drama and pathos of the infatuation of the disfigured dwarf, Quasimodo, with the beautiful and seductive gypsy, Esmeralda captured the imagination of readers in both French and English.

Many other English translations have followed, and several film and stage adaptations have also been devised. The famous film version of 1939, with Charles Laughton’s immortal performance as Quasimodo to Maureen O’Hara’s Esmeralda is the image of the hunchback that most people recognise.

The most memorable image of the hunchback from a book is probably the one below, which is neither from The Hunchback of Notre Dame nor from Notre Dame de Paris, but is from Victor Hugo et son temps, by Alfred Barbou,  published by G. Charpentier in Paris in 1881. 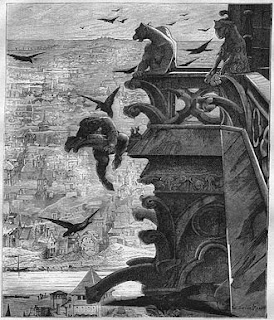 Return to the list of Gothic Novels
Posted by Chris Browne at 17:51